Most of us in the computer business have heard the story of the tech support agent and the power outage.  The customer had called in for support because their PC wouldn’t power on.  After the customer explained the problem to the support agent, the agent dutifully asked for the serial number of the computer so he could look up that unit.  The customer explained that it was really dark and he couldn’t see the serial number.  When the support tech asked the customer if they could turn on a light so they could see better, the customer explained that would be impossible since he was in the middle of a power outage and there was not electricity.  Funny story, and it’s probably true.  To me it just underscores the fact that the simplest items shouldn’t be overlooked when trying to diagnose a computer issue.

For my own experience, a number of years ago I had helped a customer with purchasing one of our custom systems.  Soon after he received the unit, he called me and was disappointed.  The system wouldn’t power on.  I was horrified.  I asked if the package arrived in good shape with no damage, and he said the box was in great shape, no problems there.  Our process is that after a PC has been built and tested it is carried to the shipping department and packed up to ship out.  It doesn’t sit around, it gets packed up right after testing.

I went through what I thought was basic troubleshooting with the customer over the phone.  Any beeps? Are the fans spinning?  Any lights? Try a different power cable.  Bypass any surge protectors, and more, but still no life from the computer.   After trying all this I told the customer we’d get a replacement shipped out right away and he said he still had the original packaging and would ship this “defective” one back.

Less than a half-hour after ending our call, the customer called back and said that the computer was running fine and he was going to start installing software on it.  He said that as he was getting it ready to ship back, he noticed the power button on the Power Supply at the rear of the PC was in the Off position.  Once he turned that on and plugged everything back in it worked just fine.  He apologized for missing this, but I stopped him and said that I was more to blame as I should have asked about that button first thing.  How it happened, who knows.  The switch could have gotten turned off during packaging when being handled or my guess is that it happened when the foam insert protectors were placed on the system before going in the box or maybe when the customer unpacked it. 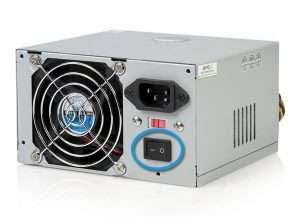 The good news is that there was nothing wrong with the computer and the customer was happy with the system and didn’t have to wait on a replacement.  By missing the basic step of asking about the position of the Power Switch we nearly had an unhappy customer, that would have had to wait several more days for another system to arrive, and we would have been out the cost of replacing his unit.  It’s good that it turned out the way it did…now I always tell myself when faced with a troubleshooting problem, “Don’t forget to ask the basic, seemingly stupid questions!”  Lot’s of computer problems have simple solutions.  If you miss a basic step you might end up taking much longer to resolve the issue and going with a more drastic solution. When it reality to fix was as easy a flipping a switch.