When USB ports first became common on PCs  in the late 1990’s USB devices could be problematic.  USB support was available as an update to Windows 95, and while Windows 98 and 98SE had more robust USB support, it could still be troublesome.  I know, because at that time I was doing desktop support for Windows 95, 98 and the dreaded Windows ME – I’m really dating myself with that statement.  In Windows 2000 and Windows XP USB got much better, USB 2.0 was introduced and since then things are for the most part easy and trouble free with USB devices…except when they don’t work and a USB Device is not recognized.  As an example from time to time on my Windows 10 Professional PC  my USB speakers  stop working.  This is more of an annoyance than anything and easily resolved by unplugging and plugging the speakers back in to the USB port.  I’ve not put much thought into resolving this problem.  Then something more troublesome happened with a USB port and we had to dig deeper. 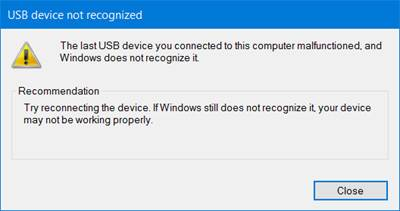 The issue was with one of the two front USB ports.  The right front USB port worked perfectly and the left one didn’t.  When you plugged a device into the left one a message popped up on the screen that the device wasn’t recognized. Our customer did some troubleshooting and thought the USB port was defective.  We got the system back in and replaced the front USB port and the internal cabling and still we had the same issue.  At this point we knew it must be a driver issue and so we uninstalled the USB controller drivers in the Device Manager and rebooted, the USB drivers were re-loaded and both ports now functioned perfectly – it never was hardware.

But why did this happen on a new, freshly installed and updated version of Windows 10 Professional.  I found an article on Microsoft.com: https://support.microsoft.com/en-us/topic/usb-port-may-stop-working-after-you-remove-or-insert-a-usb-device that talks about this issue on older versions of Windows such as Windows XP.  It seems to be exactly the same issue on Windows 10 and the same fixes apply so I think the issue isn’t resolved in Windows 10.  At the time Microsoft wrote that article they stated that the problem may occur because of a timing issue that prevents the computer from detecting the USB device.  They also said that Microsoft and other hardware vendors of chips that are used for USB have investigated the problem but the results were inconclusive because of the intermittent nature of the problem. 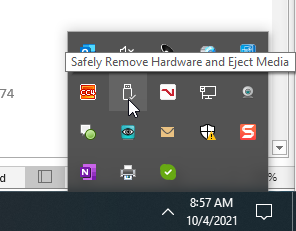 I do think after trying to duplicate the issue that unplugging and plugging a USB device repeatedly does seem to cause the issue.  Using the Safely Remove Hardware icon in System Tray does seem to reduce the likelihood that this issue will occur.

Ram PC Systems designs, builds and sells systems with USB and Serial ports for all types of uses.  Check out our complete selection of available systems here:  https://www.rampcsystems.com/product-category/computers